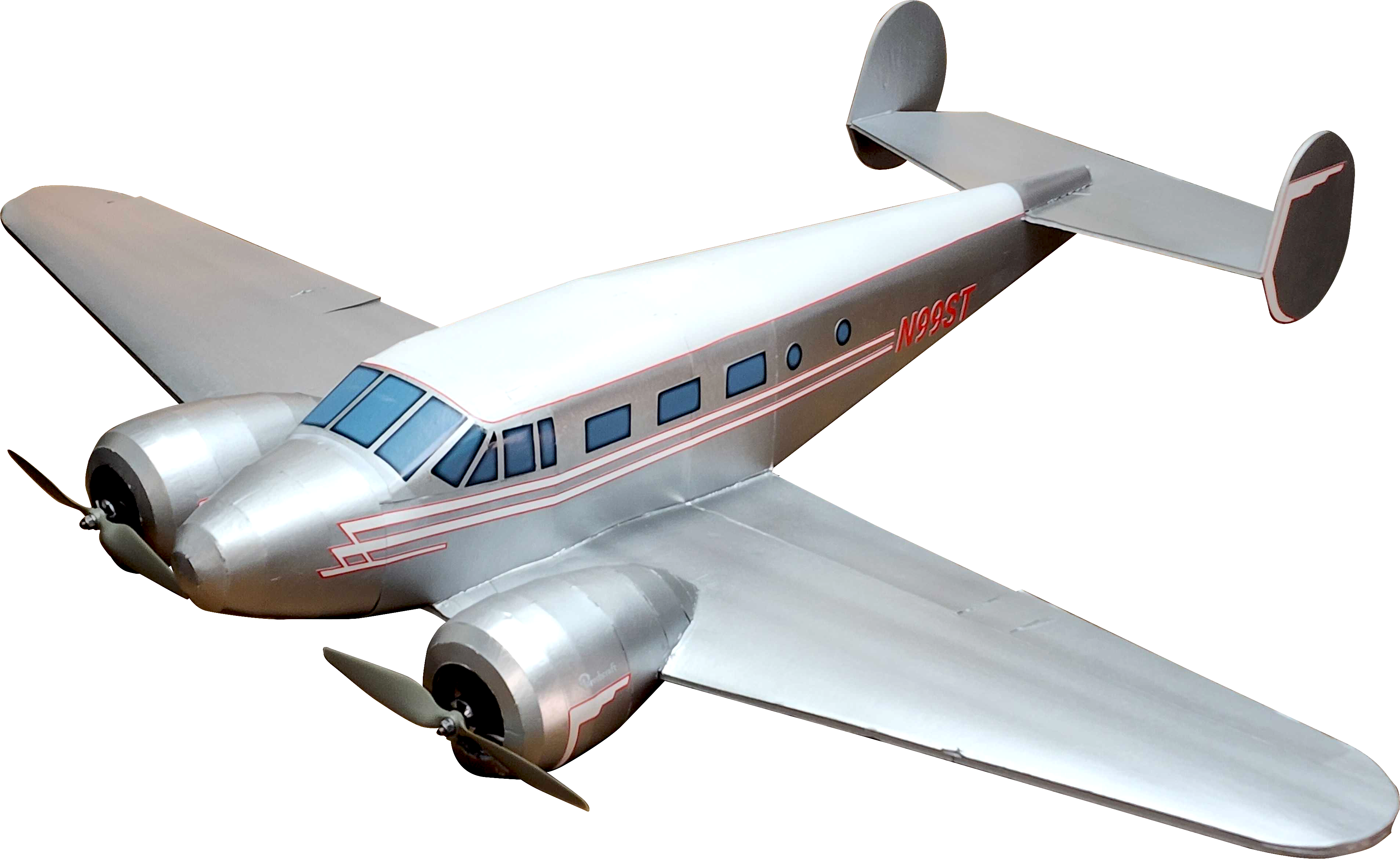 The Flite Test Beechcraft Model 18 is an easy to fly twin that is also very acrobatic with a wide flight envelope. Once built, customize your Twin Beech by painting and adding the included decals. Or really make it unique by adding one of our optional decal sets. With its classic looks and acrobatic performance, the Flite Test Beechcraft Model 18 is sure to be a welcome addition to any fleet. The Beechcraft Model 18 (aka Twin Beech) is a 6 to 11 seat, twin-engine, low-wing, tailwheel light aircraft manufactured by the Beech Aircraft Corporation of Wichita, Kansas. Continuously produced from 1937 to November 1969 (over 32 years, a world record at the time), more than 9,000 were built, making it one of the world's most widely used light aircraft. The Model 18 was used as a civilian executive, utility, and cargo aircraft. It was also sold as a passenger airliner with tailwheels, nose wheels, skis, or floats. The military versions included 5,200 that were built as cargo (C-45/JRB), photo reconnaissance (F-2/JRB), trainers (AT-7/SNB) and bomb-gunnery trainers (AT-11/SNB). The Pratt & Whitney R-985 engine powered a wide variety and large number of military and commercial aircraft, making it one of the most successful reciprocating engines ever built in its power class. As of August 2017, there were 240 Twin Beeches in the U.S. still on the FAA Aircraft Registry.

The FT Duster is a fun-scale crop duster that excels in fast pace pattern style flying. It's wide speed envelope makes it a good introductory to 4 channel flying. Full length ailerons maneuvers such...

The FT Old Fogey is a simple and slow flying 3 channel airplane. Whether you are indoors or outdoors, the Old Fogey's performance is perfect for beginners and experienced pilots alike who are looking...

This giant twin flying wing is a monster amount of fun to fly. Whether you are into flying FPV or line of sight, the Kraken is a blast! This airframe is compatible with the swappable series...

This design is inspired by Josh’s FT Explorer, as it follows the idea of a radically awesome, easy to build, fly, and modify design! The Bronco even uses the same core section from the FT Explorer,...

This combo includes everything you need to equip your C series aircraft for flight, minus your receiver and battery. Following describes the contents of this combo package:  The Flite Test...

Gens Ace 2200mAh 11.1V Lipo battery is one of the top rank battery corporations with deep research and manufacturing on NIMH, LI-PO, LI-FE by the effort of 200 professional engineers and...

The Flite Test Power Pack C Radial v.2 contains everything needed to power one of the Park Flyers planes. The only other components you will need to fly is a battery, charger, transmitter, and...

This Landing Gear Kit will convert your Beech 18 from a belly lander to a lean mean take-off (and landing) machine.  Be sure to add this kit before you build your  Beech 18 as it can...

This High quality High power battery is perfect for both long flight times and serious power that will make your master series warbird a Rockstar in the skies.  This is the preferred...