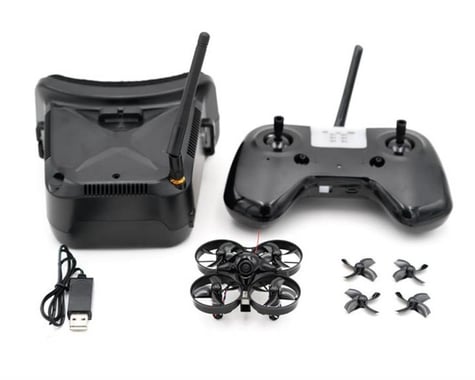 The Tiny Whoop took the drone world by storm, providing a revolutionary flight experience never before seen. The idea was adopted by many aftermarket manufacturers, and their own implementations were delivered to customers around the world to compete with the original Tiny Whoop. Many decided to go larger, but until now, no one has thought to go smaller!

Enter the Tiny Whoop Nano! With a 55mm diagonal motor to motor measurement, the Tiny Whoop Nano is certainly a new experience, as well as a new aircraft. Out of the box electronics are a perfect match for accurate and agile angle mode cruises, exploration, and spec racing. The power system can be upgraded, allowing for more speed or endurance.

The world in front of you will feel larger, due to the smaller physical size of the Tiny Whoop Nano. The Nano Whoop can slip through the smallest of obstacles, and is completely going to change the way you whoop.

55mm Light Weight Airframe
The airframe has been redesigned to be smaller, lighter (3.00g) and utilize no hardware whatsoever. Each duct has only three struts that are heavily reinforced where they attach to the duct or the motor mount. The motor mounts themselves are designed to be compatible with 0615 size motors, but a small plastic peg can be clipped out to make room for 0617 motors. Because the ducts of this airframe are closer together, the battery mount holds the battery on it’s side, which allows free flow of the air.  Finally, just under the battery mount are two tiny loops. Jesse wanted these loops to encourage the community to innovate even more Tiny Whoop games.

Turtle-able Brushed Flight Controller & Receiver Combo
The new F3 flight controller is equipped with hardware that is capable of reversing brushed motors, allowing the aircraft to flip itself over if it lands upside down, making this the first brushed Whoop-style aircraft capable of turtle-ing in any direction. The Tiny Whoop Nano FC is running the newly released “TBS Harold” flight controller software, and is tuned for snappy execution of control commands.

TBS FPV System with Smart Audio
The FPV system uses the TBS Tiny Camera, with 700TVL resolution and a redesigned camera form-factor to fit as low as possible to the airframe under the canopy. The VTX is the infamous TBS Unify Pro Nano, the world’s smallest FPV video transmitter with 25mW/50mW power levels and integrated Smart Audio, allowing the pilot to change video channels instantly using only their transmitter. The video transmitter’s stock antenna is a linear dipole on FPC substrate, which looks like a sticker on one of the rear ducts. It’s incredibly durable, and transmits beautiful, clear video.

The Sweet Spot Between Speed and Control!
The stock motors are 0615 size brushed motors with a speed of 17,000kv, allowing for a high level of  throttle resolution and altitude control for technical and tight Tiny Whooping, but can easily be upgraded to any higher-kv 0615 or 0617 brushed motors, making it an extremely light and powerful Tiny Whoop.

Lauren Loucks
Verified Owner
Team BlackSheep Tiny Whoop Nano RTF Drone
1 motor burned out immediately and FPV never did work. sure would love another one tho Had great hopes of this resetting the scrambled egg of a 2x stroke survivor.
Notforme
Verified Owner
Team BlackSheep Tiny Whoop Nano RTF Drone
TBS Whoop Nano – “For experts Only” “Not for me”
I bought a TBS Whoop Nano RTF from Amain.com and then bought a BNF from Ebay.com. The RTF “ARM” stopped arming and trouble shot this problem with tech support until it smoked while installing a battery. I then bought a BNF which flew a few days. It was fun flying this TBS whoop nano until break downs started occurring. The canopy is flimsy which easily breaks and is hard to install, the video camera circuit card is glued on the frame and came loose and the frame is also flimsy which broke within a few days. The controller, receiver, and video cards are connected with 26 gauge wires soldered connections to each circuit card. If you’re not an expert at soldering, reattaching the 26 gauge wires back when they break away will be difficult. The wires have no slack so stripping the wires back and soldering the wire back on may not work. So the wires need to be replaced as a group. Not an easy task for even for an experienced person in soldering. If you are new to this hobby, this drone is not for you. If you want something sturdy, this drone is not for you either. If you want the best bang for your buck, this drone is not for you.
Casey Childs
Verified Owner
Team BlackSheep Tiny Whoop Nano RTF Drone
One of the worst, cheapest products I've ever purchased. I'm new to drone flying and was told and watched many reviews that this was a good way to get into flying drones.

Cheap everything.
No instructions. Didn't know if the controller was connected. Had to find some Youtube videos to see how it works.

Finally found the official instructions and they're written for people that already know what all the things are. When instructions say something like "Plug the USB cable into the port" without saying what specific port to plug into. There's a USB port on the controller, the googles and the drone and it wasn't specific to what it was talking about.

After fiddling the trying to get the controller and goggles to work for about 30 mins I was finally able to get the drone to turn on and start flying. Well, or just skidding across the floor.
So I watched some how to videos on how to fly and I started figuring it out and then I crashed the drone. The hood which might as well not even be in the kit broke. So I attached the second provided hood. 2 flights later and that broke then the camera fell off. This is all within a couple hours after receiving the package from USPS. Whooo!!! What a fun day! So glad I spent my money on something that wasn't even fun for a few hours.

Seriously disappointed and a huge waste of money. If you've never flown a drone before or know nothing about them, DO NOT BUY. This thing sucks.
Alex
Verified Owner
Team BlackSheep Tiny Whoop Nano RTF Drone
I absolutely love my TBS whoop. this is my first drone ever and I’m really glad I went with this kit. It took me a while to get everything figured out on my own and to get the trim right but once i figured it out it doesn’t sit still long! I went ahead and bought 8 more batteries and a charger so I can enjoy it even longer with less down time! I’m sure this won’t be my last quad and hopefully soon I’ll move up to bigger and better gear with more practice of course!
Anthony Prez
Verified Owner
Team BlackSheep Tiny Whoop Nano RTF Drone
I would give this product 5 stars if it wasn't for one thing, the frame that the quad comes on is pretty flimsy. Going into this purchase I have never done fpv before and I now never want to go back. Everything about this product including the price is perfect. Except ofcourse the frame, considering that this is a complete starter kit which means the individual buying it most likely has no experience in fpv I would think team black sheep would take this into consideration and include a second frame with the kit. The frame is less than $4 on their official website so even if they made u pay for it, there would be almost no difference in price. I cracked one of the supports for the motors within three days of having it. It still functions but obviously this disrupts the whole structural integrity. After watching a few videos online it looks like a real easy process to replace, but again considering the obserdely low cost of a frame it would be nice if they included another one. However, I still highly recommended this product to anyone looking to get into the hobby.
Jérôme Duvoisin
Team BlackSheep Tiny Whoop Nano RTF Drone
0 of 1 customers found this review helpful.
View all reviews (4)
Related Products
Customers also purchased...