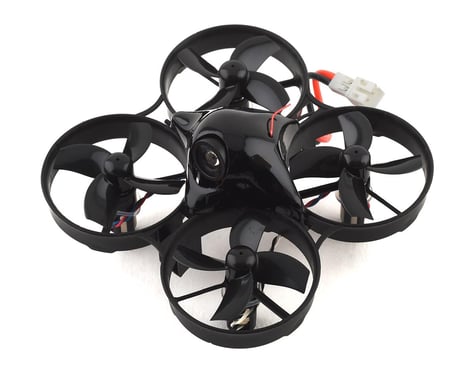 SCRATCH & DENT: Packaging and canopy are damaged
Sold as is, photo of product may not be an accurate representation of product condition. ALL SALES ARE FINAL.

The Tiny Whoop took the drone world by storm, providing a revolutionary flight experience never before seen. The idea was adopted by many aftermarket manufacturers, and their own implementations were delivered to customers around the world to compete with the original Tiny Whoop. Many decided to go larger, but until now, no one has thought to go smaller!

Enter the Tiny Whoop Nano! With a 55mm diagonal motor to motor measurement, the Tiny Whoop Nano is certainly a new experience, as well as a new aircraft. Out of the box electronics are a perfect match for accurate and agile angle mode cruises, exploration, and spec racing. The power system can be upgraded, allowing for more speed or endurance.

The world in front of you will feel larger, due to the smaller physical size of the Tiny Whoop Nano. The Nano Whoop can slip through the smallest of obstacles, and is completely going to change the way you whoop.

55mm Light Weight Airframe
The airframe has been redesigned to be smaller, lighter (3.00g) and utilize no hardware whatsoever. Each duct has only three struts that are heavily reinforced where they attach to the duct or the motor mount. The motor mounts themselves are designed to be compatible with 0615 size motors, but a small plastic peg can be clipped out to make room for 0617 motors. Because the ducts of this airframe are closer together, the battery mount holds the battery on it’s side, which allows free flow of the air.  Finally, just under the battery mount are two tiny loops. Jesse wanted these loops to encourage the community to innovate even more Tiny Whoop games.

Turtle-able Brushed Flight Controller & Receiver Combo
The new F3 flight controller is equipped with hardware that is capable of reversing brushed motors, allowing the aircraft to flip itself over if it lands upside down, making this the first brushed Whoop-style aircraft capable of turtle-ing in any direction. The Tiny Whoop Nano FC is running the newly released “TBS Harold” flight controller software, and is tuned for snappy execution of control commands.

TBS FPV System with Smart Audio
The FPV system uses the TBS Tiny Camera, with 700TVL resolution and a redesigned camera form-factor to fit as low as possible to the airframe under the canopy. The VTX is the infamous TBS Unify Pro Nano, the world’s smallest FPV video transmitter with 25mW/50mW power levels and integrated Smart Audio, allowing the pilot to change video channels instantly using only their transmitter. The video transmitter’s stock antenna is a linear dipole on FPC substrate, which looks like a sticker on one of the rear ducts. It’s incredibly durable, and transmits beautiful, clear video.

The Sweet Spot Between Speed and Control!
The stock motors are 0615 size brushed motors with a speed of 17,000kv, allowing for a high level of  throttle resolution and altitude control for technical and tight Tiny Whooping, but can easily be upgraded to any higher-kv 0615 or 0617 brushed motors, making it an extremely light and powerful Tiny Whoop.