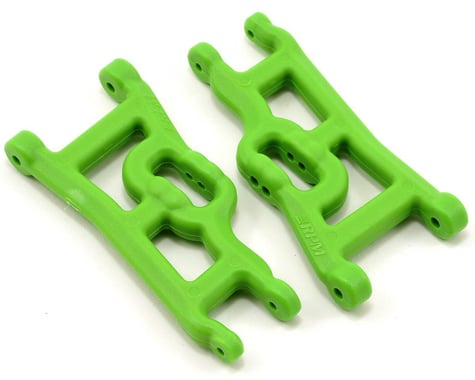 Out Of Stock Online
You may back order this item and it will ship when it arrives.
Back Order
Save In List
Write the first review!

This item is eligible for $2.99 flat rate shipping Learn More

This is an optional RPM Front A-Arm Set, for the Traxxas Slash 2wd, Nitro Slash, e-Rustler & e-Stampede 2wd. These arms are built to withstand abuse. Plus, they shave some unwanted unsprung weight as well! RPM Front A-arms are nearly 25% lighter than stock versions of the same A-arms, and are backed by RPM's world-renowned breakage warranty. Additionally, RPM has increased clearance areas in the outer portion of the A-arms to allow increased droop travel when used in conjunction with RPM oversized bearing carriers (RPM80372 & RPM80382).

RPM front A-arms for the Electric versions of the Traxxas Slash, Rustler & Stampede are sold in pairs and are available in black, green, blue and red. These A-arms are molded with what is fast becoming an RPM trademark design of angled leading and trailing edges to reduce frontal edge mass and improve the a-arm’s ability to ride up and over tall obstacles instead of slamming into them. RPM A-arms are extremely rigid for superior ride and stability over the roughest tracks and terrain.

This product was added to our catalog on November 17, 2011