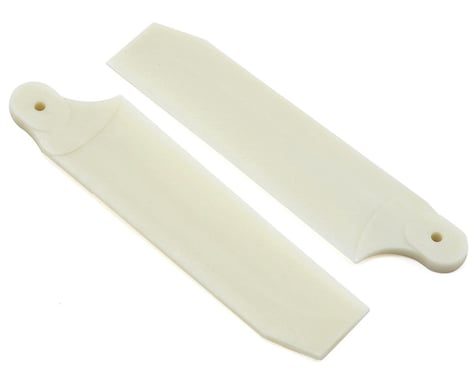 Out Of Stock Online
You may back order this item and it will ship when it arrives.
$2.99 flat rate shipping! Learn More
Back Order
Save In List
Read Reviews Write a Review

This is an optional K&B Dream Designs Extreme Edition 104mm Tail Blade Set, and is intended for use with 90 and 700 class helicopters. These extreme edition blades are made to be extremely strong and stiff to withstand the demands of high performance 3D flight.
Jo Blo
KBDD International Extreme Edition 104mm Tail Blade Set (White)
I created an account just to reply to the only review regarding the blades separating from the heli. I did so to prevent others from reading it, then worrying about if it could happen to them then not buying the single best tail blades for heavy 3D use.

First, this is complete BS! There is NO way this happened and the person who said it did happen, is outright lying. I suspect they wrote it to somehow troll the review boards to appear as if they saved a bird that lost not 1, BUT 2 tail blades! They somehow landed it without any heading control (guessing to sound cool anonymously) but was a total failure in doing so. The bird would go into a major spin uncontrollably rotating around the axis without having the inertia from the blades to maintain heading (which is the sole purpose of the tail) to break the Gs! How could you (or anyone) have safely landed it without the physics being there that's required to do what you said you did? Uh huh, yeah that's physically possible right? Sure you did!

Number 2, I SOLELY use these KBDD EEs on ALL my birds, only this tail blade and NOTHING else for EXTREME 3D. I have never, ever had any type of failure with them on multiple T-Rex 700s and T-Rex 600s! These blades touch the ground from time to time (naturally) and they hold up better than any carbon fiber! I used to replace CF blades weekly because they would begin to break after any rock, dirt, or leafs but not these EEs, they hold up to ANYTHING! I ONLY fly HEAVY 3D and these blades are ROCK solid and have NEVER separated from anything! The only time I have ever had an issue was when my tail grip screws began rounding from extreme centrifugal force of heavy 3D, that's METAL rounding out of a straight edge from the G-forces but nothing happened to the tail blades. This means they uphold during HEAVY 3D that bent a metal screw but didn't touch or affect the blades themselves. This is proof the previous review is complete nonsense! So for this idiot to say they separated from the bird, it could ONLY be a faulty build (IE didn't locktite the screws so they vibrated loose) but these blades did NOT separate!

I do not work or have ANY affiliation to this website or KBDD whatsoever. I saw this review a few weeks ago and it gnawed at me so here's my review (which is a real life review) not some trollers trying to look cool by saying they landed an impossible maneuver!
Jon M NM
KBDD International Extreme Edition 104mm Tail Blade Set (White)
While waiting for some 106 carbon fiber blades to become available (Out of Stock) i bolted a set of these on my E7. They worked great and I was impressed with the performance of the plastic. I went into idle up 3 which was set at 2300rpm and within 2 seconds one blade separated from the bird followed buy the second one. I hit hold and brought it in for a really lucky save. This was a lesson learned by me. But I would still recommend these to any person planning on keeping there head speed below 2000.
1 of 2 customers found this review helpful.
View all reviews (2)
Related Products
Customers also purchased...