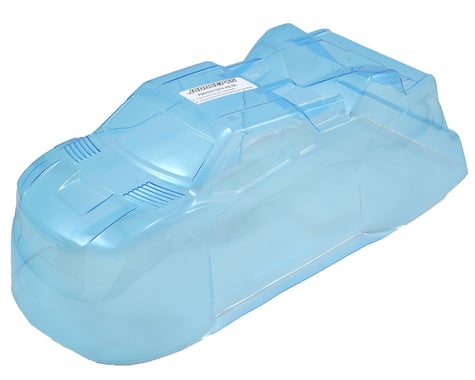 Read Reviews
(2)
Write a Review
Discontinued Online
This item is discontinued and no longer available for purchase. You may want to search our site for a similar item.
This is the JConcepts "Finnisher" Body, and is intended for use with the TLR 22T 1/10 stadium truck. The TLR 22T Finnisher body is a drop fit for the popular vehicle and bears a stunning look with its massive front headlight and grill coverage. Increased windshield angle provides a steady force upfront during mid-flight wind gusts on large jumps. Forward cab placement changes performance / visible bias which helps steering rotation in low traction corners. The side body panels have a strong and chiseled look, including a recessed area in the center that extends forward, ending near the front wheel well.

The front hood has been simplified removing unwanted changes in height to neutralize the at-speed handling. The chassis side-guard to body fit has been tightened up by way of a bendable flap. Where applicable, the flap touches off against the side-guard which helps eliminate large empty voids that contribute to mid-flight directional changes. The rear of the cab has a featured 3 rail design which improves body durability and appearance. A small raised portion in the bed forms an area which can be trimmed to allow air to escape near the middle of the bed through its V-shaped design. In addition to the newly designed body, JConcepts has included an additional and separate rear spoiler for the best performance possible.

Anonymous
JConcepts TLR 22T "Finnisher" Body w/Spoiler
This is an awsome body, fit is perfect and make the truck jumps betters. Most important it looks awsome ! :)
Phil Campos
Verified Owner
JConcepts TLR 22T "Finnisher" Body w/Spoiler
Love this body mostly because it protects the front body post from breaking on hard crashes, the angle on this design is much better than the stock one. Stock design allows front body mounts to hit the ground causing them to crack or break off.
View all reviews (2)
Related Products