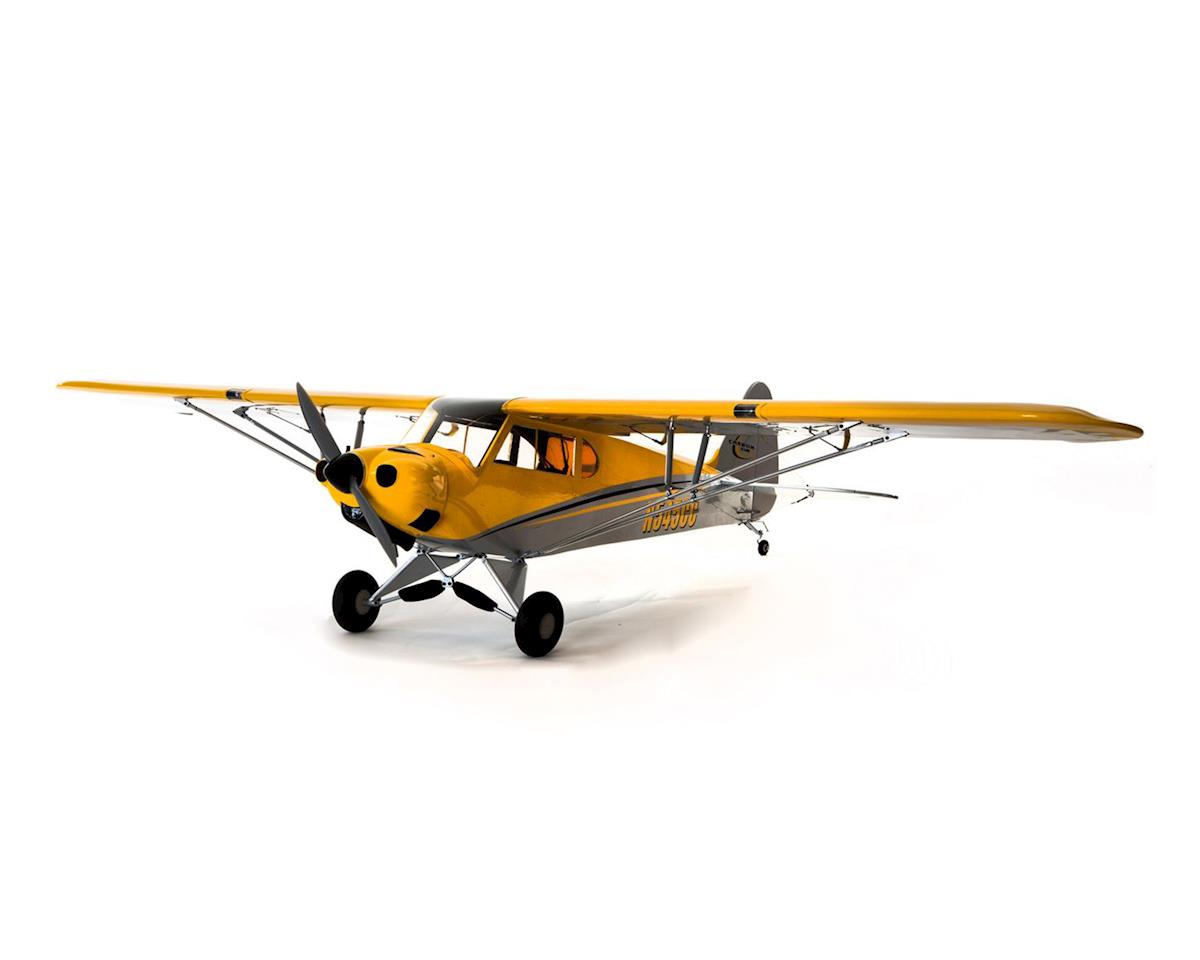 The Hangar 9 Carbon Cub 15cc ARF brings the heritage and versatility of the full scale airplane to life with a modern all-wood model that combines classic looks with a higher performance spirit. Featuring a 90-inch wingspan, this large model delivers the experience of giant scale, yet is practical enough to fly every day. The two-piece wing allows for convenient transportation and the quick-connect struts make assembly simple. Scale detail like cockpit doors, interior features, landing lights and a scale spinner mean that this Carbon Cub model will easily turn heads at the field. A light wing loading plus functional flaps help you perform impressive short takeoff and landings. Like the full-size, shock-absorbing landing gear take most of the bounce out of grass strips. With the optional 1/5-scale float set (sold separately) you can enjoy the same adventure-driven performance at the local lake.

Versatility that Makes Giant Scale Fun
The Cub is a classic aircraft that’s adored by both full-scale and model aviation pilots. Its flying qualities and design versatility have come to be known well enough that practically every new aircraft is compared to it. That’s a lot to be said for an airplane that first flew in 1938. Cub Crafters of Yakima, Washington started their booming business by restoring original Cub airframes. Very quickly, the collection of engineered refinements spawned a brand new line of aircraft like the Carbon Cub that honors the original icon yet delivers performance that’s every pilot’s dream.

Get fuel efficiency and gas engine ease-of-operation when you choose the Evolution® 15GX engine for this Carbon Cub. Its pumped carburetor design allows fuel to flow consistently regardless of fuel tank location or aircraft attitude while flying. Evolution Small Block gas engines offer lightweight construction and standard beam-mount installation like a glow engine. But what sets this engine truly apart from the glow-fueled counterparts is the phenomenal fuel efficiency. On average, it takes only 30% of the gas/petrol to provide the same run time as a comparably sized glow engine. That’s an amazing efficiency level that results in a cost per flight savings of approximately 90%.

When you go to choose a transmitter, receiver and servos required for a quality airplane like this Hangar 9 Carbon Cub 15cc model, consider all the advantages genuine Spektrum™ technology gives you. Not only will you possess a proven radio system at a great price, you’ll get the safety benefits that only ModelMatch and SmartSafe features can give.

Scott M. Elliott Jr.
Hangar 9 Carbon Cub 15cc ARF Airplane Kit (Electric/Nitro/Gasoline) (2280mm)
I've been in the hobby for decades but this plane ARF kit wins the award for the poorest
selection of components EVER. The wing struts are heavy aluminum and the gear is functional
but made of STEEL! The gear is so heavy and the springs so strong that you may have just
used a solid piece of aluminum--and that would have been lighter. On the bright side the
wood construction and covering is great. I was so dissatisfied that I got rid of the plane
and wish I'd never wasted the money. You can do far better.
1 customer found this review helpful.
View all reviews (1)