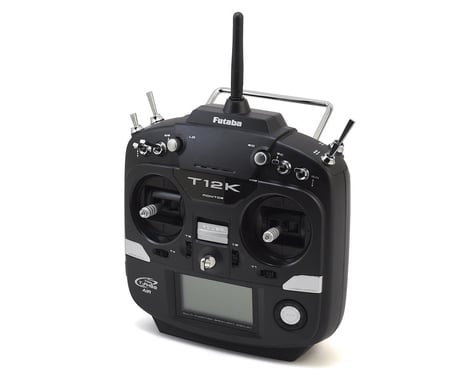 The Futaba 12KA 14-Channel Airplane Transmitter System combines first-class performance with incredible versatility to create a system that's easy to operate, yet feature-packed! This package has been developed specifically for airplanes, but can be programmed to operate helicopters, FPV drones, or other aircraft as well.

Equipped with the rock-solid Futaba S-FHSS and T-FHSS protocols, the 12K is compatible with almost a dozen different Futaba receivers to suit modelers' needs. The 12K can transmit and receive telemetry data via the T-FHSS protocol. Simply install Futaba telemetry sensors (sold separately) to monitor flight data, receive alerts while in flight and more. These sensors allow pilots to keep track of battery voltage, altitude, speed and other key flight functions.

In addition to telemetry, the 12K can be used with S.Bus2 gear to add multiple servos, gyros and more to set-ups with fewer cables. Pilots with non-telemetry set-ups can take advantage of the interference-free S-FHSS protocol. A large, backlit LCD screen, expandable 30-model memory, a 6V 1800mAh NiMH battery and charger are just a few more of the features the 12K has to offer.