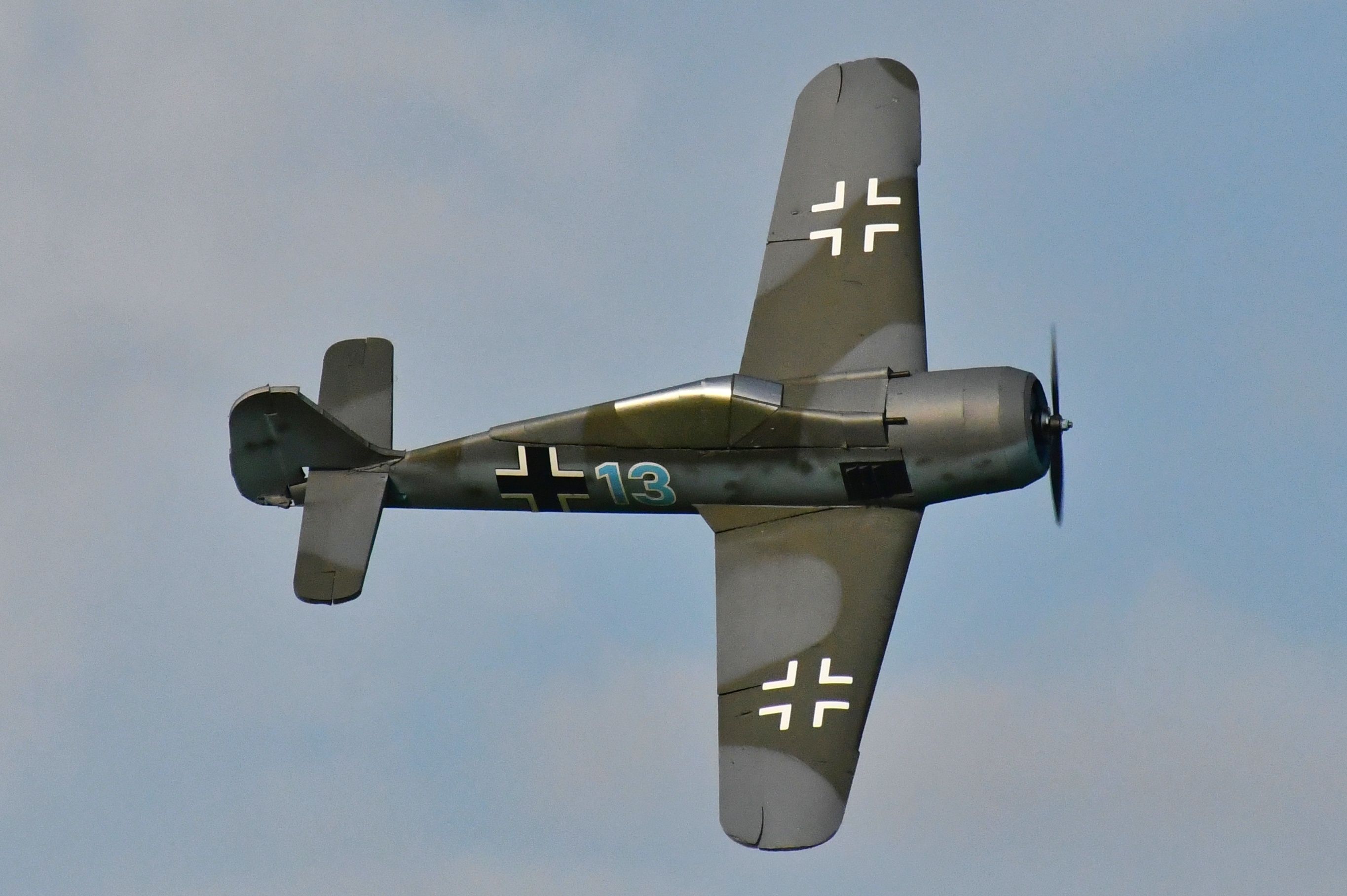 The Focke-Wulf Fw 190 Würger or Shrike in English, was named after a small carnivorous bird of prey known for impaling its prey on spikes and shared the nickname “Butcherbird”. One of World War II's most iconic military aircraft, its first air-to-air engagement occurred over Dunkirk, France on September 1st, 1941. The Fw 190 proved superior in all but turn radius to the Spitfire Mk V, especially at low and medium altitudes, and its introduction prompted the RAF to make serious plans to steal one! The Fw 190 was one of the only radial engine fighter aircraft used in Europe at the time. The twin-row BMW radial engine enabled the Fw 190 to lift larger loads than the Bf 109, allowing its use as a day fighter, fighter-bomber, ground-attack aircraft, and, to a lesser degree, night fighter. The Fw 190 would go on to become the favorite ofGermany’s highest-scoring fighter aces.The Flite Test Mighty Mini Fw 190 is a fast but smooth flyer with the rates dialed back.The Aura 5 will also smooth out your flights by removing the adverse effects of gusty wind. Turn up the rates and cut up the sky with crazy aerobatics. The Mini Fw 190 uses the Power Pack F for great power and efficiency. Once built, customize your Fw 190 by scuffing, painting, and adding the included decals for a finished scale appearance.

The FT Blur was designed with racing in mind. In collaboration with pro Pilot Kevin “KMEAD” Mead and with inspiration from some of the best racing frames around “Floss“...

This is a replacement Flite Test Float Set for the Micro Adventure Airplane.

A handy adapter to convert an XT60 equipped battery to an XT90 plug. Useful for use with an XT90 equipped ESC or Charge lead.

The F-16 is a single-engine multi-role fighter aircraft originally developed by General Dynamics for the USAF. Designed as an air superiority day fighter, it has evolved into a successful all-weather...

The Flite Test Mini Corsair is a new and exciting chapter for or FT Mini line up. The Mini Corsair is as rewarding to build as it is to fly. That is because of our collaboration with designer John...

The Flite Test Mighty Mini Zero brings all the rewards of flying a classic warbird and packs it into a small package that is both fun to build and fly. The Mighty Series aircraft designs are known...