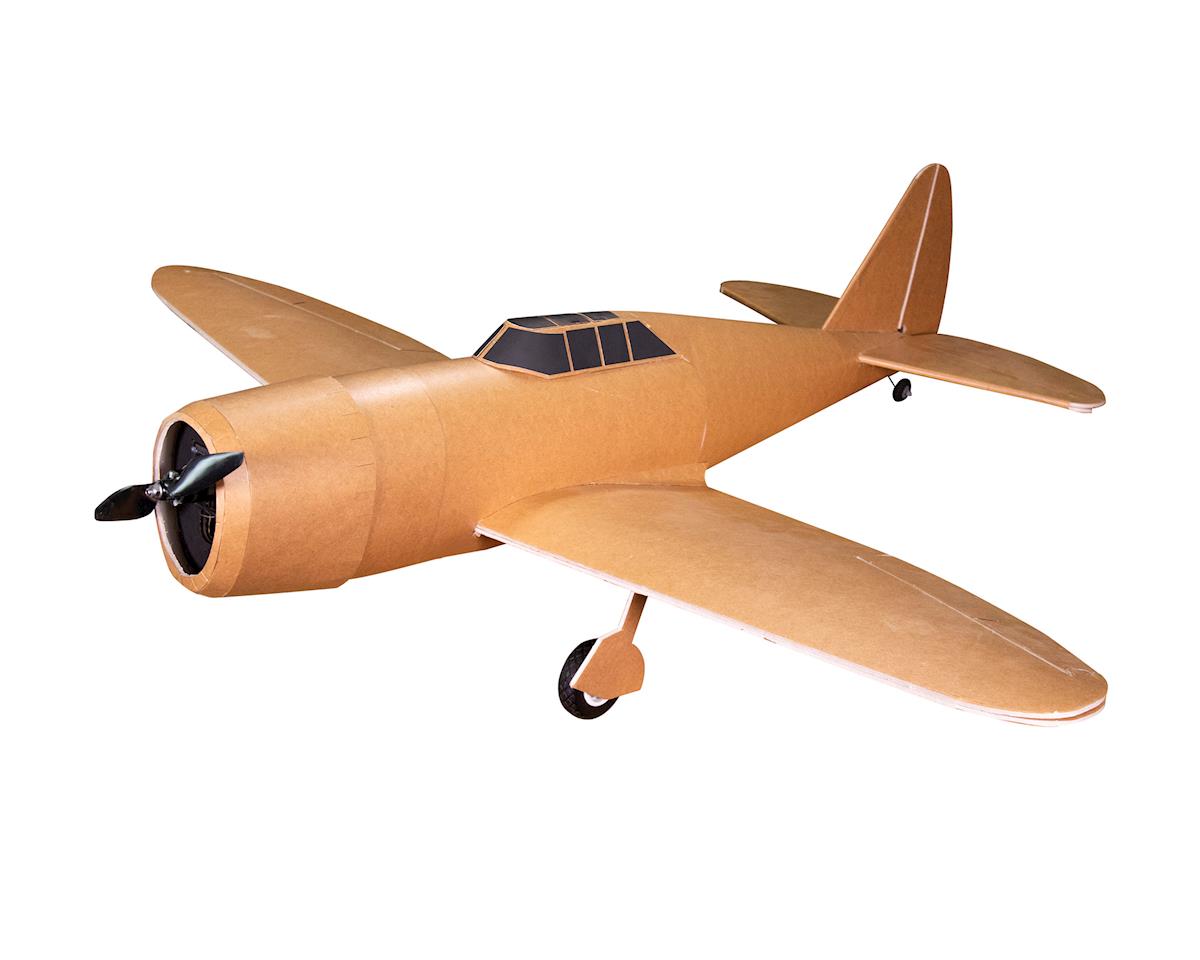 The P47 is the second plane of the Flite Test Master Series developed in collaboration with John Overstreet. Using "mold-together" techniques, the FT P47 is just as rewarding to build as it is to fly. This is a basic 4 channel Warbird that has an advanced build experience, and intermediate flying experience. This plane has all the great looks of a classic P47 Warbird and well rounded and predictable flight characteristics, which is usually uncommon with RC warbirds.

Note: Stickers are not included!

This product was added to our catalog on August 5, 2019

Scott Y.
Verified Owner
Flite Test FT P-47 Electric Airplane Kit (1206mm)
This plane is really something. This kit includes the options to build either the Razorback version, or the Bubbletop version. The power-pack with the newer stronger motor gives you plenty of power to have fun with. If you're looking at this for your first build kit from FT or just your first build period, I'd go with something a tad bit easier. Molding the foam against a straight-edge like your table to get curved pieces isn't what makes this plane a bit harder to build, it's sort of a combination of factors. Certain folds in this build can tend to not come out right. I know there are posts on the forums with people having issues with the battery box not being equal which can throw the spine of the plane off-kilter

*TL;DR at the bottom*

The biggest issue with this kit is Flite Test's build video. The editing for the build is horrendous, with some parts out of order, some parts forcing you to search a 4 hour video back and forth, and some parts just completely missing. The camera-work is sub-par at times; when the person instructing you is trying to show certain angles of how to cut/glue/attach parts the camera is hardly ever positioned so it's shown clearly leaving quite a bit of guess work. This video is 4 hours long, so be prepared and strap in. And while you'd think a 4 hour video would be good, as it might be extremely detailed, that's not the case. The video contains instructions for both the Bubbletop and Razorback, but after roughly an hour when you finish building the parts that are universal to either version, the video starts to jump between the razorback and Bubbletop. In the video description they have a few basic timestamps laid out, but it doesn't cover the extent to which you have to jump around. One example of things being omitted is the foam landing gear that is shown in the pictures here on the website- there is indeed foam gear in the kit, but there are no tires, and the gear is never mentioned once in the entire 4 hour video, and you're never shown how to install it. Another omission is the small piece of foam used to test your control surface throw angles at the very end of the build; this foam piece isn't mentioned until Josh brings it up at the very end of a 4 hour video by which time I could not even find the piece he was speaking of, and going over every inch of each foam board I'm not sure my kit even had the thing. Another big problem is if you favor the Bubbletop and plan to build that version, the video is more-or-less dedicated to the razorback. If you want to go with the Bubbletop, you have to skip to around 2 and a half hours into the video to get the instructions on how to do the Bubbletop tail. However (and quite literally) 5 seconds after you follow the instructions and finish up the tail section, it jump-cuts from your fresh-built bare-bones Bubbletop tail to test fitting and gluing a completed Razorback tail section complete with rudder/elevator/linkage/servos installed to the front portion of the plane. So if you don't immediately catch this and do your test-fit and then glue the tail to the front as the video tells you, you soon figure out the video just skipped about 10 steps on you, you'll have to drag your bar around a 4 hour video to find out just what step you should be on, and then have to either install your linkage and servos with the tail glued to the main body and with little hand room, or cutting your freshly glued tail off because the video just jumps around. The instructions themselves are decent enough, and the guy goes slow enough that you can get enough of an idea of what you're doing to pause the video and do it. But the editing of the video is just outright bad, and mashing 2 builds into one video forcing you to go back and forth, while jump cutting from the Bubbletop to the Razorback without telling you and skipping steps while doing so just adds unnecessary difficulty to this build.

-Kit includes both Bubbletop and Razorback build options.
-Plane is downright awesome. Great looks, customizable, flies great.
-Power pack C with the updated motor gives good power to enjoy yourself with
-CG is pretty easy to find and takes little messing about to get right
-You can follow the directions exactly and still some folds don't come out quite right, for example the battery box; also the control surfaces can end up being off by quite a margin, forcing you to do some extensive sub-trim fixes with your radio.
-Build video is absolutely horrible, especially if planning to build the Bubbletop. Some things are completely omitted, other things are out of order, other things have you searching an over 4 hour long video back and forth to try and find. This build desperately needs re-done, and have a video dedicated to each version instead of mashing them both together.
3 customers found this review helpful.
Thomas Esterly
Verified Owner
Flite Test FT P-47 Electric Airplane Kit (1206mm)
Great airplane kit... This was my first Flite Test build. I followed the video through the build process and had no issues. The video helps a lot. You can stop the video and re-watch sections until you feel comfortable to proceed. I painted the P-47 and have yet to fly it... hopefully over the Thanksgiving holiday 2019... I have always loved the Thunderbolt and this kit truly represents the old fighter...
2 customers found this review helpful.
View all reviews (2)