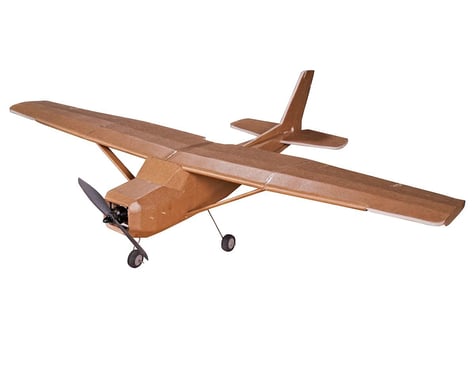 Out Of Stock Online
You may back order this item and it will ship when it arrives.

The Flite Test Commuter is an airplane designed by the community tester, Ben Harber. The built is considered intermediate, and is an ideal choice for pilots looking for slightly more skilled build process, and a docile and relaxing every day flyer.

Two designs are possible, the first is the yank and bank style with only aileron and elevator control. However, you can add rudder control (with extras purchase such as servo and linkage).

Jeffry Daniels
Verified Owner
Flite Test Commuter Electric Airplane Kit (762mm)
Yes the build is a bit different but I flew for a minute this evening. Still working on the trim (rudder) Ran out of daylight and broke a prop before I got it dialed in....

The build video I watched was on the tech channel...two hours after it was posted. Good one Mr.Bixler. https://www.youtube.com/watch?v=nE2933vb_Cw

You should watch the nose portion of the video a couple of times. It make sense when you are finished. :) Especially the fiddly bits right at the end...or should I say nose. It's lovely how the compound angles all come together. Go slow- get done fast.

As I was experimenting with a new flight controller I initially taped the wing on. Hard crash tore the top of the windshield a bit.

Made a decision to go with the flight controller and glued the wing on...added the struts and repaired the little tear...

This is a tough little bird.

Now that I know how to do it I am ordering a second Commuter.
3 customers found this review helpful.
Jesse Bodine
Verified Owner
Flite Test Commuter Electric Airplane Kit (762mm)
Amazing flying airplane! Tough too, builds nice and easy. Powered mine with a throttleable Cox 0.049 glow engine, rather than the recommended electric setup! Gave it a 4 ounce fuel tank, throttle servo, the works. Mine's incredibly overweight and, on a 6x4 Top Flite wood 1/2a prop and half a tank of 24% nitro 1/2a fuel on board, it still lifted off without a care in the world!

My maiden flight ended prematurely when the throttle servo came unglued and shut the engine off when it was low-and-slow; plane nosedived like a brick. Sum total of damage was a nose gear stoved in, I had it airworthy again with maybe 45 minutes of work.


If you're even half-tempted by an FT aircraft, this is a good one to start with. You won't regret building one of these!
2 customers found this review helpful.
andrew_flyguy
Verified Owner
Flite Test Commuter Electric Airplane Kit (762mm)
What a joy to build and fly!! This plane went together in about 4 hrs or so from kit form and flew PERFECTLY with absolutely zero trim - I'm in awe! Control and maneuvering is docile and forgiving. If you're expecting slow, scale flying akin to the real Cessna 150, you're going to adore this plane. Amazing design and a blast all around. Outstanding work to Ben Harber and the Flite Test crew that brought this kit to the public.
2 customers found this review helpful.
Scott Sarnes
Verified Owner
Flite Test Commuter Electric Airplane Kit (762mm)
This little C150 is so cool! Really fun build after you have built a couple of the simpler models. Flies incredibly well and looks surprisingly realistic in the air, even handles a little breeze. Painted mine white and did a red trim scheme with colored electrical tape and added small white vinyl precut letters and numbers for the N-number. These planes are my new addiction, I've built three from FT kits and three from scratch, what a blast!. I've built well over 200 RC planes in my 45 years, thanks FLITE TEST for all you're doing to keep this hobby alive.

Keep 'em coming (maybe a Beech D18 and/or a DC3 pretty please?)
1 customer found this review helpful.
Nicholas Bourgeois
Flite Test Commuter Electric Airplane Kit (762mm)
I'm a beginner RC plane flyer but this is my experience. Also, I have other flite test planes and thoroughly enjoy them. I am in no way trying to bash or negatively sway others away from this flier. However, my notes here are just my experiences of flying this plane 30+ times and may contain inherited problems due to poor build. I would love help if my description identifies my problem and anyone knows a solution.

This plane is DURABLE. I have crashed this thing into concrete, grass and wooden fences with the most damage being bent wing tips and a pushed in power pod. Not even a propeller break! Also, the battery compartment fits the recommended battery perfectly snug. Hence, I gave it 2 stars.

The lack of 3 stars comes from the following:

Let me explain. I take off "runway" style. It takes about 20 feet at full throttle to self-lift at 90+% throttle. Less than 90% means I taxi forever. Immediately after lift off, it goes vertical and appears tail heavy. I solved this by adding 3 US quarters to the nose of the plane and not doing any movement after takeoff. If wind speed slowed or the need to correct a roll imposed by wind occurred, the plane does wild rolls from side to side, eventually crashing. Does this mean the plane is underpowered, or is this me my horrible flying and overcompensating?

The instructions do not explain the wheel system clearly either. After 3 taxi events, I noticed the wheels were eating into the glue "collars" and making the wheels rigid. I had to bend the wheel axel rod such that the wheel would gravitate towards the plane center, resulting in "positive chamber" configuration. I also had to re-glue and tape reinforce the front landing gear as the first crash tried to rip the triangular wheel mount off.

The placement of the tail servos in the same compartment as the receiver, ESC and other electronics meant there was potential for no servo movement if any of these components were to wedge themselves in the servo arms. This caused a crash or 2 for me. Consider creating a deflective shield out of the extra foam board to prevent this from occurring or implementing the removable wing idea explained later in this comment.

Usage of the single hole control horns and the 1st notch on the servo meant the throws were super short. Thus, my rudder and elevator do not move much. While elevator movement is not so critical, rudder is. Especially for taking turns while taxiing. I see videos of people turning while taxiing, I can't replicate that. My turns take 30 feet where theirs take 5 feet. My rudder only moves about 50% of the available space made by the design. I am not sure how to fix that since I've already added the coffee straws to the rods.

The tail servos should be inverted such that if a servo arm needs replacing or I want to use a longer arm, I don't have to drill a random hole in the wing top, thru to the canopy, to unscrew it.

It seems to me that the wing should have been designed to be removable instead of utilizing a tiny hatch in the bottom. Thus, giving massive access to the canopy, access to the servo arms for replacement and a greater ability to organize internal electronics. Is this an option and if so, would it be a Skewer + Rubber Band Combo? What are the downsides here?

The instructions do not address the usage of the straw covers to strengthen servo rod movement. I had to add these on the tail servos because the rod flex lessened tail control surface movement to almost nothing; especially under wind load.

Tape should be added to the power pod on all sides, especially where the skewer sticks are inserted to provide additional support for nose crashes.

The "wing support rods" with the skewer embedded did not have enough foam paper available to cover the skewer and over my crashes, the paper is coming off. Aesthetics but should be an easy fix.

Why are there no air flow exit points? Assuming it just won't get hot enough? I'm seriously asking because I also have the Mustang which seems to have plenty of air flow paths.

Food for thought, am I off base here?
Rowan Albright
Flite Test Commuter Electric Airplane Kit (762mm)
I absolutely loved this airplane, it's a dream to fly and the geometric shape of the nose was delightful to build. You can do tricks like loops, rolls, and stall-turns. It has a calming effect every time I fly it, and its docile flights and forgiving characteristics make this airplane my favorite I've ever flown. Even after flying it for months, the crashes it endured have led to little damage and ones that can be fixed with some glue. Recently I had a rough crash, smashing the front of the plane, yet even with its nose squashed it still flew just as good. One of my complaints has to do with how the elevator is designed. The control horn embedded into one side of the elevator causes half of it to bend more than the other, causing the plane to slightly bank to the side. That's just my theory as to why it veers to one side, although I could be wrong. All in all, I highly recommend this airplane. It flys slow and smooth, and can take some relatively strong gusts, and just as hard crashes. Five stars!
Stephen Kelly
Verified Owner
Flite Test Commuter Electric Airplane Kit (762mm)
Decided to make the Commuter my first FT build, I have a rapidly developing soft spot for Cessna's. Word of wisdom, if you are new to RC as I am, just be patient and fly it on a calm evening, you'll love it. I use a 3s 900ma, had to do a bit of modification to the pod to fit a battery but it can be done. Cruises nicely on half throttle. Great choice of plane if you want to get your flying time up and you don't want to have to wait for your instructor for your nitro plane once a week, for example :) Avoid taking it to a park and wind until you have it well under control.
Kieran Waterman
Flite Test Commuter Electric Airplane Kit (762mm)
This is a wonderful little plane. It’s definitely a challenging build compared to some of the classic Mighty Minis but I love the looks and it’s worth the challenge. The Commuter is very relaxing and graceful to fly, with minimal torque issues and almost complete silence from the new Radial A Pack motor. The landing gear was also a pleasant surprise in that I could both take off and land on it with ease, even with the fixed nose gear. FT has a real winner in the Commuter and I look forward to a bigger version someday.
View all reviews (8)
Related Products
Customers also purchased...