Read Reviews
(5) Average Rating:5
Write a Review
This item is discontinued and no longer available for purchase. You may want to search our site for a similar item.
Note: Manufacturer does not allow using discount coupons
Discontinued Online 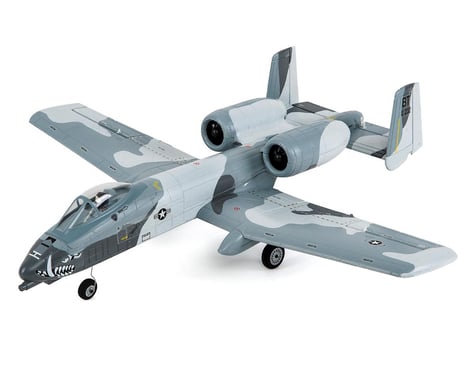 Scale detail, gobs of power and turn-on-a-dime agility make this ultra micro A-10 one of the most exciting EDF experiences of any size. It comes flight ready with an AS3X receiver that makes it feel like it’s flying on rails, right out of the box.

Unlike stealth aircraft that take out enemies anonymously or from a distance, the A-10 Warthog is designed to get up close and personal with its targets. Its mere appearance over the battlefield is enough to send most enemy ground forces running for cover, especially if they’ve ever gotten a taste of its 30mm nose cannon – a weapon so powerful, it can shred through the armor of a tank with a single burst. This awesome firepower, combined with its ability to turn on a dime and stay on station while taking enormous amounts of damage, has made the A-10 America’s premier close air support fighter for over 40 years.

With the UMX™ A-10, you can finally enjoy an ultra micro RC replica of the mighty Warthog that does its legend justice. It perfectly blends scale detail with an abundance of power, crisp control response and AS3X® stability to give you one of the most exciting EDF experiences of any size.

This product was added to our catalog on December 9, 2016

peter scarlett
Verified Owner
E-flite Ultra-Micro UMX A-10 BNF Electric Twin Ducted Fan Jet (562mm)
So I have flown my a10 about 20 times since I got her. I have not smashed the nose once, knock on wood. She flies beautifully. Reading the RC groups forum on this model prior to flying is highly recommended. There are many lessons on there that will help you avoid unneeded heartache. I use a credit card to help remove the battery. I added a 2mm carbon rod in the nose to add stiffness. I also very carefully checked my COG with the manual to make sure She responds well.

I mostly fly without the landing gear and belllyland without any issues.

I have smashed the landing gears on a crooked landing. i went to my local hobby store picked up some 1mm piano wire and no made a new set myself.
3 customers found this review helpful.
Andreas Mueller
E-flite Ultra-Micro UMX A-10 BNF Electric Twin Ducted Fan Jet (562mm)
My A10 has 300 flights or more. The plane is fantasic. I had three crashes. First vertical impact whe I flew the plane with 25mph wind over the trees. Second crash on another field inverted in a 20inch hill. Third crash inverted in a fence when I tried to fly under the fence. Overall the fuselase was 5 times brocken, the wing three times and the tail two times. And the plane flys fantasic every day. I love it.
1 customer found this review helpful.
James Headrick
Verified Owner
E-flite Ultra-Micro UMX A-10 BNF Electric Twin Ducted Fan Jet (562mm)
Nice plane! First edf owned flew well and plenty of power but it is flimsy on the nose and will break very easily
Ultra Micro Maniacs
Verified Owner
E-flite Ultra-Micro UMX A-10 BNF Electric Twin Ducted Fan Jet (562mm)
"Excellent!"
This plane showed me the future of EDF. From gliding takeoff to basic maneuver, invert slow fly and knife edge possible.
The output of the EDF is wonderful, there are two engines with a static thrust of 30 g or more. It makes vertical upwards in the loop easier.
Past EDF aircraft was difficult to take off and landing due to lack of thrust at low speed. This plane has overcome its weakness. So you can even touch and go for a short distance.
I felt that the future where EDF should go is this direction.

ultra micro maniacs :-
Jayce Bourque
Verified Owner
E-flite Ultra-Micro UMX A-10 BNF Electric Twin Ducted Fan Jet (562mm)
Didnt get to fly it sadly. I dont know whati did wrong i was han launching it and all it would do it nose dive. It did that twice so now the nose is crushed working on repairing it.
0 of 1 customers found this review helpful.
View all reviews (5)
Related Products
Customers that bought this also purchased...
Previous Next Move Close