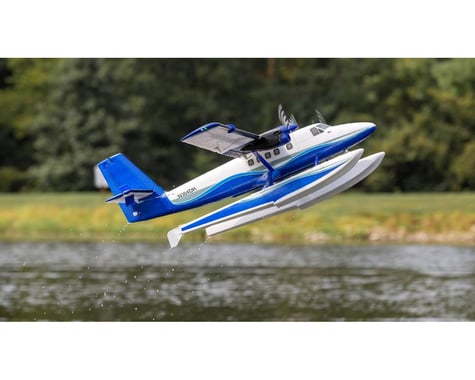 This is an E-flite Twin Otter PNP Electric Airplane with Floats. The DHC-6 Twin Otter was developed by de Havilland Canada in 1965. Designed as a rugged STOL (Short Take-Off and Landing) commuter aircraft, the Twin Otter carried passengers and cargo into harsh environments such as the sub-zero Antarctic and scorching North African desert. The line was shut down in 1988, after producing 844 aircraft. Viking Air Limited purchased the Type Certificates for all out-of-production de Havilland aircraft in 2005 and announced the Viking Series 400 Twin Otter Production Program two years later. By mid-2015 Viking delivered 75 new aircraft and re-established the Twin Otter as a successful commuter airliner — while nearly 500 of the original aircraft also remained in operation.

For RC pilots who want a great first (or next) twin model, there's no better choice than the E-flite Twin Otter 1.2m. It delivers exciting "bush plane" scale looks and performance along with the inherent stability of a high-wing design. The convenient size of the Twin Otter means you can transport it fully assembled for flying at a wide variety of locations with paved, grass or packed dirt surfaces, such as large parks, sports fields and RC flying fields. Adventures won't stop there, though — remove the tricycle landing gear, install the provided floats, and now you're ready to fly off of large ponds and small lakes. Along with molded-in panel lines, corrugated control surfaces and a scale-inspired trim scheme, the E-flite Twin Otter comes with many functional features including operational flaps, LED navigation and landing lights, and props finished with black and white stripes that look awesome whether spinning or standing still. The Twin Otter 1.2m offers a truly unique flying experience that a wide range of pilots can enjoy.

This product was added to our catalog on January 20, 2020