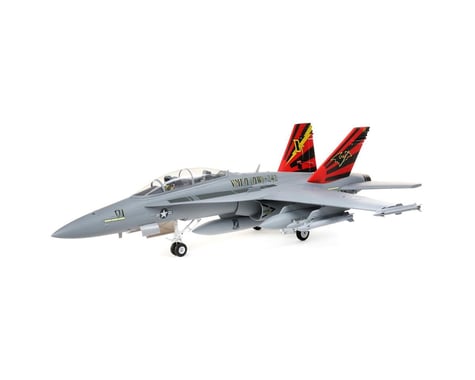 Out Of Stock Online
You may back order this item and it will ship when it arrives.
Back Order
Save In List
Write the first review!

The E-Flite F-18 Hornet 80mm EDF BNF Basic Electric Ducted Fan Jet with AS3X & SAFE Technology is modeled after the F/A-18 Hornet used by the U.S. Navy and Marine Corps as both a fighter and an attack platform.  This replica has been modeled after the F/A-18D two-seat variant, operated primarily by the U.S. Marine Corps in night attack and Forward Air Controller (Airborne) [FAC(A)] roles. The trim and color scheme are taken from the U.S. Marine All-Weather Fighter Attack Squadron 242 – the "Bats" – based in Iwakuni, Japan. This redesigned fan jet is intended for experienced pilots and delivers an exceptional flight as well as many extra scale and functional details, including factory-installed LED lights, full-flying stabs and operational flaps.

With 6S LiPo power its V2 12-blade 80mm fan, high-RPM brushless inrunner motor and 100A ESC deliver fantastic performance with virtually instantaneous throttle response. This power system also provides better performance and longer flight times than the 6S-compatible power systems used in larger models — plus it offers a turbine-like sound! This model is also equipped with landing gear matching any F-18 EDF model, and the shock-absorbing, trailing-link struts are painted white for an even more realistic appearance. Constructed of durable, fully-molded EPO material, no glue is required for assembly and it can be ready to fly in less time than it takes to charge a battery.

This product was added to our catalog on October 11, 2019